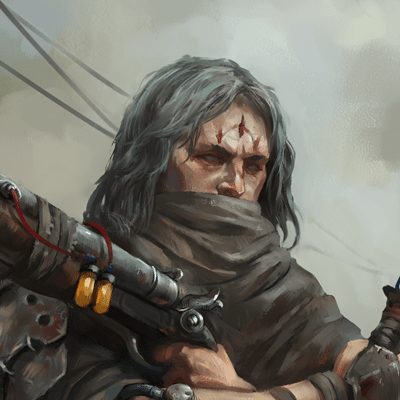 Biography
General Edward Kyroswolf was part of Elite 7, a United Front special forces group. He has extensive experience with demolitions and security, and his prowess in close combat is unmatched. In 2341 General Edward Kyroswolf retired from covert operations to become a training instructor in the Academy in Tigbar. His reputation as a skilled combat coach grew until early 2350 when a shadow from his past returned.  A former member of Elite 7 and a close friend, Christopher Essex tried to annihilate all the remaining Elite 7 members without explanation.

Kyroswolf seeks out an old comrade and former pupil, Donald “Ironsides” Bane.  Even their combined abilities were not enough to save the other members of Elite 7, and most of the veterans from his unit were killed.  The Elite units were disbanded and their members sent into seclusion for their protection.

This made the General reconsider his retirement, and he called in many favors to return to the service and form a new unit.  He brought in the few surviving Elite 7 members and a fresh batch of recruits. He currently serves as the commander of the United Front Hellraisers, where his primary mission is to locate and recruit the missing operatives of Elite 8 and 9, who have also begun to disappear, usually after visiting a system containing an Ophidian arena.  His secondary mission is <CLASSIFIED>.

“Ironsides” went missing while investigating a lead in the arena on <CLASSIFIED>, and General Kyroswolf orders his tech ops to locate Warrior-specialized gladiator training centers throughout the galaxy that would allow his soldiers (including himself) to go undercover.  They are seeking intelligence on any ties between Essex, who has completely vanished, and the Ophidians.   This will bring him into contact with gladiators and other combatants… and it may even put his skills to the test in the arena.