It’s hard to believe that this story goes back to 2002, which seems like a lifetime ago.  I was working as a consultant for various advertising and marketing agencies in New York CIty, and playing a couple of nights a week at the legendary Neutral Ground. 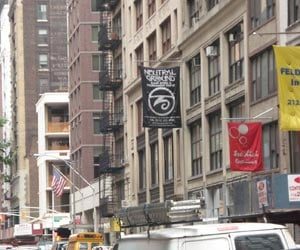 While I had played a lot of Magic: The Gathering early on, I had moved on to other games, only stepping back to Magic for limited formats that included my favorite: drafting.   I like any format that tries to level the playing field a bit, but I mostly enjoy it because it’s a format that requires players to create their own victory with whatever tools are available.  It can get people looking at cards they might not have considered before, and unlock latent creativity.

I’m not sure where I’d seen the posting, but I remember getting the email address of someone who was looking for playtesters for a new game that they were working on.  I shot them a note, and within a day or two, I was in an office building after-hours, being shown some cards (no templates or art, just text) and learning about the game that would become Ophidian 2350.  It was quite rough at that point, but it did have some promising attributes, including a very unique way of handling what they called “The Flow.”  This is what we now call “Momentum” because it’s all about capturing the feeling of the ebb and flow of battle.

I remember breaking the game early on because of an important fact that many people forget.  Game design is a specific skill set.  When it comes to card games, Set design is another specific skill set.  That is, the design of the cards that utilize the overall game design.   Having one skill set does not automatically mean that a designer has the other, and sometimes there can be gaps in either or both of these skill sets.   The marriage of these skills can mean long-term success for a game.  The original Star Wars CCG, for example, had a solid foundation for the game design, but there were strong and weak sets that were released.  The Death Star II set has been lauded for being an incredibly well-designed set. Magic: The Gathering has had strong and weak sets as well, as many players will attest.

It isn’t about overall power, it’s about how cards interact, and the function of those cards within the larger card pool.

So when it came to Ophidian 2350‘s early designs, there were some things that stuck out like road flares to me.  I quickly cobbled together a deck to highlight these issues, steamrolled one of the other designers, and then set to work to help improve the game.

Several weeks later, we had added Reinforcement Gladiators, and the Cheer mechanic, among other smaller elements.

Fleer Trading Cards, the company that was to publish the game, hired me as a gaming consultant to work as an intermediary between Fleer and the members of the Ophidian design team, establish an organized play system, and begin promoting and marketing the game.   I was also sent out by Fleer, traveling across the United States, mostly by rental car, visiting game shops and teaching people the game in California, Tennessee, Ohio, Georgia, and Washington to name a few of the places I flew to.  Fleer was headquartered in New Jersey, and I lived about an hour away in New York City at the time.

In 2003, the game was released as a CCG (Collectible Card Game) at a time when CCGs had over-saturated the market.  Given that, and the fact that Fleer was in serious financial trouble before the game was even released, it didn’t surprise many people when Fleer began to shut down less than a year after the game’s release.

I went on to work for a few other game companies, releasing the Conan CCG, as well as working behind the scenes on several other releases across the industry. 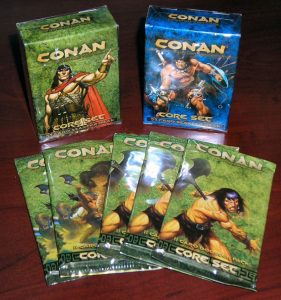 Fast forward to 2015, when I met my now business partners at Hack and Slash Games.  After a few months of freelance work, I joined the company and took on the task of redesigning Ophidian for the next phase of the journey.  In hindsight, we overestimated the popularity of the CCG and tied the new game to the old CCG, making the game 100% compatible.  While this wasn’t a bad thing, it did lead to some choices for the design of a few cards that could have been handled better.   Still, the Kickstarter was successful, and we released what I believe is an extremely playable, engaging, beautiful-looking game in the summer of 2016: Ophidian 2360: Survival of the Fittest.

Rancheck’s evolution, from Ophidian 2350 to the eventual release in Ophidian 2360.

We were plagued with issues from the start – the printing company used substandard materials in our packaging, so that everything had to be reboxed.  Our marketing efforts were foiled left and right from how things are listed on BGG to an apathetic market that assumed it was just another CCG, when in fact the game was released as a non-collectible game (much like Fantasy Flight Games’ LCG model).  We tried the standard setup of going through distributors, but in a market where the sales staff of a distributor has a limited amount of time to talk to retailers about your game when compared to sure-selling blockbuster games, those efforts fell flat.  Marketing can only take you so far, but if your game isn’t on shelves, it’s time to find a new way to do things.

We did some things right – We printed everything here in the US, which allowed us to get the game to market quickly.  We removed the gratuitous style of artwork that reduced (especially female) characters into sex objects rather than arena fighters.  We increased representation of different groups in the universe, and we donated materials to worthy causes across the country.

So we have decided that it’s time to relaunch the game in a new format.  Rather than splitting the game up in pairs of playable decks, we want to give you everything in one box.  More than that, we want to add options for how people play the game.

That’s what we’re working on for Galactic Warriors: Fate of Ophidian

First and foremost, the game plays well with 2-4 players, so we’re going to emphasize that.    A 4-player game of Galactic Warriors is great!

Secondly, while constructed deck had been the only way to play before, for many it will likely be supplanted by drafting.  Drafting will allow repeat play for players with many, many options.  When we launch the KS, the full release will contain enough materials for up to 6 players to draft together.  While people could sit down to a 6-player game, we feel that it would be better to have two 3-player games, or some other combination.  A 3 vs 3 game is also quite a lot of fun!
Further, if we reach some of our stretch goals, we can increase this to give enough cards for 8 players to draft together, all out of a single box!

Now, this alone would be a great addition, but we also feel that gladiator combat comes in many forms.  Sometimes it’s gladiators fighting gladiators.  Sometimes, it’s gladiators fighting huge beasts and other challenges!  Yes, that’s right… players will be able to play cooperatively against a “boss” that is automated.  No need for a player to control the bad guy, the game will take care of that for you.  In fact, it will do so with components that will be new and unique!  The Galactic Warriors box will contain at least 4 different boss monsters to fight, with more being added via stretch goals and add-ons.

We don’t want to leave anyone out… so all bosses will scale depending on the number of players, which means that a single player can take on a boss as well.  You read that right… that means solo play will also be supported!

The best part about all of this is that the gameplay is the same in each of these game formats.  You don’t need to learn to play the game differently, once you’ve learned you know everything you need to take on players or boss monsters..

Stay tuned as we continue to preview details for Galactic Warriors, coming to Kickstarter later this year!