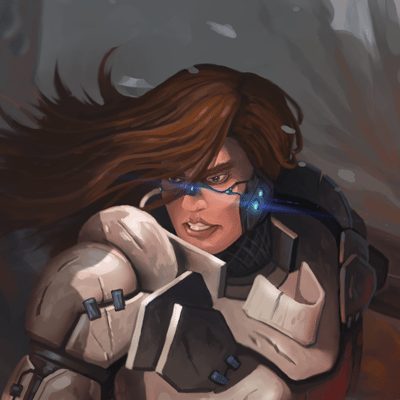 Biography
Trista Valar is a scientist who specializes in integrating biological and cybernetic systems. She’s augmented herself both biologically and cybernetically to be able to hold her own in the arenas, though her focus on intellectual pursuits still puts her behind those who dedicate themselves to martial training. Highly intelligent and manipulative, she is also rather arrogant (albeit deservedly so). Her fights are usually slow, grinding down her opponents with a variety of afflictions and using her own experimental creatures and constructs to stall for time while the enemies weaken.

Her wife died some years ago under mysterious circumstances. Rumors say the Ophidians were responsible, but she refuses to discuss the matter with anyone, so the details are unknown. If true, it would explain why she seems to have a grudge against them. In either case, she knows full well that she’d be quickly overwhelmed if she tried to take any direct action against them, so for now she bides her time, advancing her research and building connections.

*The patrons of Pathogenesis, enjoying the financial successes of her experiments, allow her to enter matches for 2 less VP.