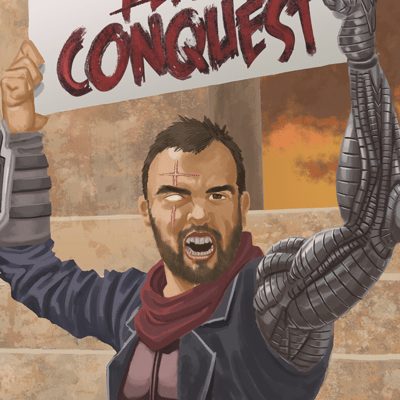 Biography
Torias Odgen claims to be from the planet Nub-Waset, a planet that does not appear on any charts or in any database. He has never revealed any further information about his origins. Some have suggested that he may have a military or mercenary background due to the way that he moves and carries himself, but at this point it’s only speculation.
He has an inexplicable fixation with Grandstander. Ophidian Security arrested him, but did not impose the standard lifetime ban from the Arenas after his confrontation with Grandstander in Raba.  Torias jumped into the Arena and slammed Grandstander with his trademark “Ophidian Means Conquest” poster, shouting, “I know your secret!” over and over.

Timeline
2360 Odgen is arrested by Ophidian Security forces after his confrontation with Grandstander. As a unique and unprecedented punishment, he was sentenced to one year in the Arenas, a sentence which did not seem to bother Odgen in the least.