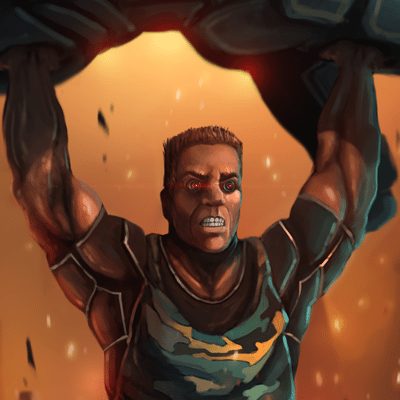 Biography
Far more machine than man, Legion represents the final outcome of the many experiments to create the perfect soldier. The program produced many iterations, with success finally coming through their 9th version.  In his former life as a soldier, he had an admirable career.  With time, it has regressed towards its machine nature. As Version 9 it took no prisoners and showed no mercy to any who opposed it, including other Version 9’s.

Once over 300 Version 9’s were contracted to Ophidian. After one match against another Version 9, Legion was almost completely destroyed and needed a full restoration.  In order to improve performance, the Ophidian scientists gave it a sense of humanity by implanting a human soul extracted from a recently captured soldier and from that day on, it became more more than it was before. It is the next version: Version X – also known as Legion.

Timeline
2333 Over 300 retired soldiers are contracted to the Justich Federation by Surge’s Protectorate Armada, rebuild as Version 9’s.
2337 Because of Version 9’s reliability, it moves up to the 2VP Gladiator Class on the Justish Federation League. In a match featuring two of the last Version 9’s this one is grievously damaged.
2359 One of the last surviving Version 9’s body, memories and brain patterns were successfully rebuilt and is bought mid-season by the Ophidian League ranked 3VP, and it is re-branded as Version X – Legion.
2360 Legion places second in the Ophidian Championships. It is promoted to 4VP.