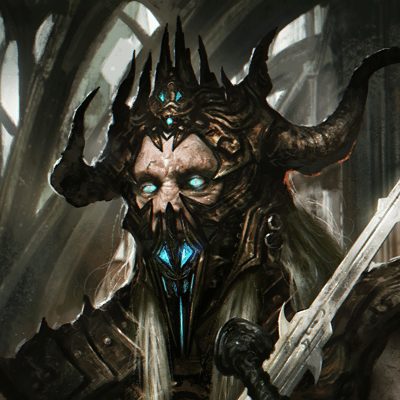 Biography
Kos’Bargithd is a tall, thin demon from Skiverkilial. He is a swordmaster, and his favorite weapon is a three-foot long cursed sword.  Trained to become a fearsome warrior on any battlefield, he specialized in the sword.  On a raid, he uncovered the sword that would become a part of him in a weapons cache, and despite the pain he endures while wielding it, he will not let anyone else near it unless he is attacking them with it… or unless it is Pestilence, his mentor.

Pestilence taught Kos’Bargithd how to add bio-poisons to his weapon, making an attack from the massive weapon debilitating to many gladiators.

In his early matches, Kos’Bargithd served as a henchman to Arkzilipul, bravely defending his master inside the arena.  Kos’bargithd’s mission outside the arenas was to track down P.K. and lead Arkzilipul to his target.

In the years since Arkzilipul and Pestilence left the active gladiator rosters, Kos’Bargithd has gained power and experience, and subsequently greater ambition.  He has frequently been spotted outside of the arena at crime scenes.  It’s unknown if he is acting on his own,  but he has been spotted on the scene of multiple facilities where experimental cybernetics were stolen.  The Ophidian League has denied all allegations that Kos’Bargithd is involved in any way.

Arkzilipul’s return to the arenas has added a new wrinkle to Kos’Bargithd’s story.   The two have teamed up a few times in recent matches, and faced off against each other in others… it’s unclear if there is still a connection but Kos’ seems to be taking higher risks, and every bookie in known space is betting that Kos’Bargithd will rise up to a new VP level any day now.

Timeline
2356 Kos’Bargithd enters Ophidian League by the hand of Arkzilipul in order to track down P.K.
2360 Arkzilipul returns to the arena, and Kos’Bargithd begins to enter higher-stakes matches to fight at his former master’s side.