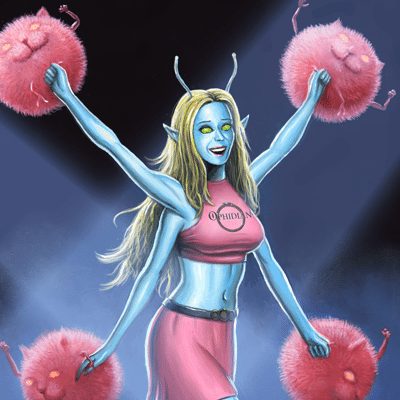 Biography
J’enn is a Pab’an, but she was born with a strange genetic anomaly. It gave her four arms instead of two, and left her face smooth and lacking the jutting jawline and tusks that are typical of an adult Pab’an.  Since her birth, J’enn has been an outsider in her society. She was approached by an agent for the Ophidian Arenas, who expressed how all of the features that made her an outcast among her own people would be assets in the Arenas.  Left with few other choices, she agreed, and the day she entered into the world of Gladiatorial Combat as a cheerleader, she finally found per purpose.
Due to her quadruple arms, she can perform strange and oddly graceful routines that no one else can rival, and she finds fulfillment and joy in the Arenas… something that few find in such a place.