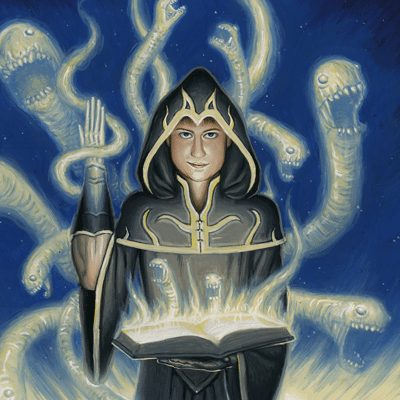 Biography
Dorbin Prictor is a Gladiator shrouded in mystery. Publically, not much is known about his origins–the only information released by the Ophidian League is that he is The Avatar of Kistarbak. A relative newcomer to the League, the Kistarbak Collective is known for its affinity for law and the legal system, often preferring to litigate to avoid conflict. Their species has a natural defense mechanism that includes partial intangibility, which has only enhanced their ability to negotiate. Culturally, the law is practically worshiped on Kistarbak. Law is their religion. Dorbin is their first contribution to the Arenas. It is rumored that the Kistarbak Law Council brokered a deal with the Ophidians, offering up Dorbin as part of a collective bargain, and there are rumors that he was granted Alpha-level Psychic abilities through genetic modification. The re-sequencing of Dorbin’s genetic code by the Ophidians has also given him the ability to access the mysterious network of portals, granting him the Summoner discipline. Unfortunately, much of Dorbin’s previous life and personality seems to have been lost in this process, as he seems to believe that he is truly the righteous manifestation of the Kistarbak legal system, and in fact some sort of deity. His powers and successes in the Arenas have done little to dissuade that belief. Dorbin Prictor fans also believe he is the avatar of a higher power, a belief that other gladiators find amusing… until they meet him in the Arenas.

*The patrons of the Avatar of Kistarbak allow him to enter matches for 1 less VP.