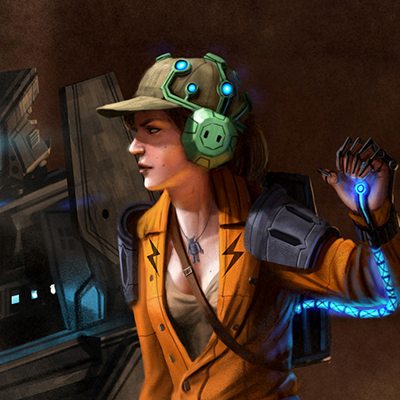 Biography
Jana Storm was a simple janitor for the Helix Company. She kept her head down, performing her duties without incident or notice until a demon Gladiator broke into the laboratory. Jana was doing her usual service when the demon attempted to steal some experimental cybernetics for his masters. Immediately, the laboratory security guards entered the room and hell broke loose. Jana Storm was injured in the midst of the fight and only was able to survive due to her natural ability to create cybernetic minions that shielded her. Suspected of being involved in the incident, Jana was fired from the Helix Company.  She was acquired a few months later by the Komshof Corporation, and they decided to weaponize her natural abilities to create cybernetic minions with a neural cortex exoskeleton. She could then infuse them with her psionic abilities to make them better/stronger. During a recent Komshof Corporation/Ophidian Empire agreement, Jana Storm was offered to the Ophidians to fight in the Arenas as Animator as the Komshof Corporation representative. In the Arenas Animator is on the rise, and some even say that she will go up in rank before the season ends.

Timeline
2358 Animator injured during a break-in in a Helix Co.’s top secret lab.
2360 Animator enters the Ophidian Arenas as a 2 VP competitor via a Komshof Corporation/Ophidian Empire agreement.