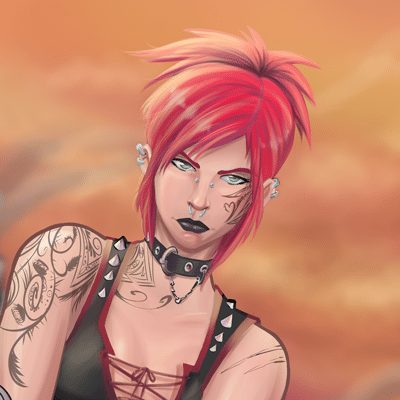 Biography
Angie is the textbook definition of “bad” girl, always making poor decisions and messing with the wrong people. Supposedly, she dated David “Freakshow” Dangers, falling for him after seeing a picture of him in a tattoo parlor.  This was also her introduction to the Ophidian Arenas.
While visiting the arenas to see Freakshow, Angie befriended Ashley, the demon team leader of the cheerleaders.  Ashley wanted her friend to become a cheerleader, and at a victory party Angie’s moves convinced the rest of the cheerleaders that she should be invited to join the squad.
Angie accepted the invite, and became a crowd favorite.  Angie is known for convincing the crowd to help her team out, even getting the wealthier patrons to kick in a few resources in a pinch.  She is renowned throughout the Ophidian League.